All articles tagged with "Shit Eating"

These mistresses were angered by how lewd and perverted this guy was. He was trying to show how macho he was but he ended up pissing them off. The mistresses had to think quickly on what to do to him and they settled on scat fetish. He was fed their poo and he got the shock of a lifetime as he had never experienced that before and never imagine it could happen to him.

This loser had been ordered to eat shit for dinner and to wash it down with pee. Mistress Gaia was asked to supervise what he did and she made sure he did what she wanted. The mistress watched as the guy ate the shit as if he was eating a gourmet meal and also how he drank pee as if it was champagne. She was ready to add him more if he did not cooperate.

Goddess Zhou does not like snitches. He feels they are weaklings and they do not deserve to be anywhere near her. This guy snitched on her and she had to give him a reason never to do it again. She roughed him up and she got him to eat her shit and told him that if he ever snitched on her or anyone else again, he would have himself to blame.

Mistress Gaia had two slaves to punish. She was torn between punishing them at the same time or doing it one slave at a time. Because she wanted the punishments to be effective, she chose to do it to the individual slaves. She caged one and she got started on the other. The mistress took a shit on the slave while the caged one watched and was scared of what she would do to him too.

Insane couple use shit as lube

When it comes to insane couples, this naughty and kinky couple takes the trophy. They love to do crazy things that few other couples can even think about let alone attempt. Today they outdid themselves by playing with shit. The mistresses took a shit on each other and they smeared their bodies with the shit. They then had oral sex and tasted the mixed shit before they used it as lube to fuck hard.

Mistress and her scat fetish

This mistress has a thing for poo and she is not afraid to say it. She loves to use her poo to dominate and today she made this guy her bitch by making him eat her shit. She had asked him to eat it but he did not do it. She had to find a way to force him to do it and she got it. She even made him jerk off while he ate it. 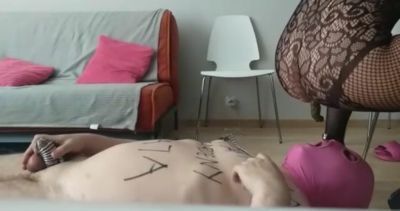 Mistress shits on guy for badmouthing her

When this mistress was told that this guy had said bad things behind her back, she did not believe it. But when she was given the evidence of what he had said, she was pissed and she punished him. She tortured him using her shit fetish. She fed him her poo and she also used him as her human toilet. The punishment was cruel and taught him a lesson he needed to be taught.

Goddess K was pissed off by this guy and she had to get her revenge. She used her fetish for poo to teach him a lesson she was sure he would never forget in a very long time to come. She asked him to be her human toilet and he knew it was a trap and he could do nothing about it. He ate her shit by being her toilet slave and he learned his lesson.

This mistress was fed up with the way her neighbor acted. He was always making noise for others and he was rude. She had had enough of him and she had to teach him a lesson. She stormed his house and she made him eat her shit. She did not even give him time to compose himself. She just went straight to it and he was shaken to his core.

Mistress Anna wanted this loser to learn a lesson. She was not going to let him off the hook that easily. She had to do something that would send a message that she was not a pushover. She lured him to her house where she turned him into her human toilet and pooped on him. She only let him go after he had eaten her poo and drank her pee.